I’ve noticed that most visitors to my blog come to this page, so I’m guessing there are a lot of people out there building slot car tracks! This video was from an old post, but I thought I’d put it here permanently. I wanted to try and create an onboard view from a car. Here’s a couple photos of the camera car I rigged up. It’s a GoPro camera attached to a slot car chassis with rubber bands. The battery pack powers the headlights. 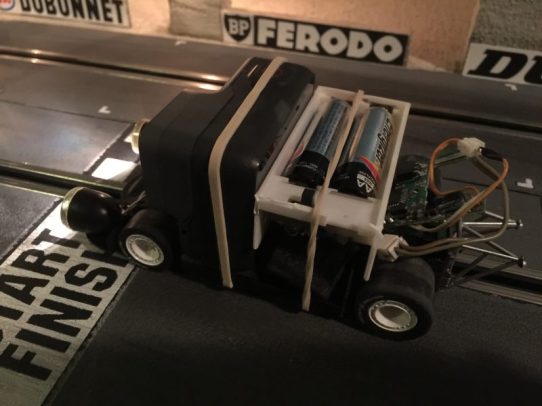 The video below is an overhead view of the almost completed track with four cars running. As you Carrera Digital owners know, you can run six at a time, but it’s hard to keep them from banging into each other on the lane switching sections!

During the 2015 holidays, I decided to buy myself a 1:32 scale digital slog car set. It’s admittedly a mostly sentimental thing—I had one when I was a kid, and I’ve always wanted to build a scenic layout like those model train guys do. So, I researched how guys were doing that, and found that using styrofoam for structure was becoming the lightweight, and less permanent way to go. So, I bought a couple 4′ x 8′ sheets of 2 inch thick insulation styrofoam and, with a steak knife, shaped them into a roughly 5′ x 10′ base, and joined them with duct tape. I set the base up on three folding card tables so I could easily slide the whole thing around on the laminate floor.

I used a German software to design this layout. Space is limited, and because Carrera 1:32 scale track is the largest track available from current makers of consumer slot car track, it was going to be a challenge to create an interesting, raceable layout that would have some room for scenery. Next, I began experimenting with elevation changes for overpasses. I guess the result was a big pretzel!

For realism, I wanted the track to be flush with road shoulders, so I trimmed and hot-glued 1/4″ styrofoam around the entire track, including elevated surfaces. I used low-temp hot glue to join everything.

My plan was to model a racecourse typical of the 60’s and 70’s, which sometimes utilized public roads and had none of the safety features of modern tracks, such as large runoff areas and safer barriers. I wanted the course to be punishing, just like the famous European courses of old. 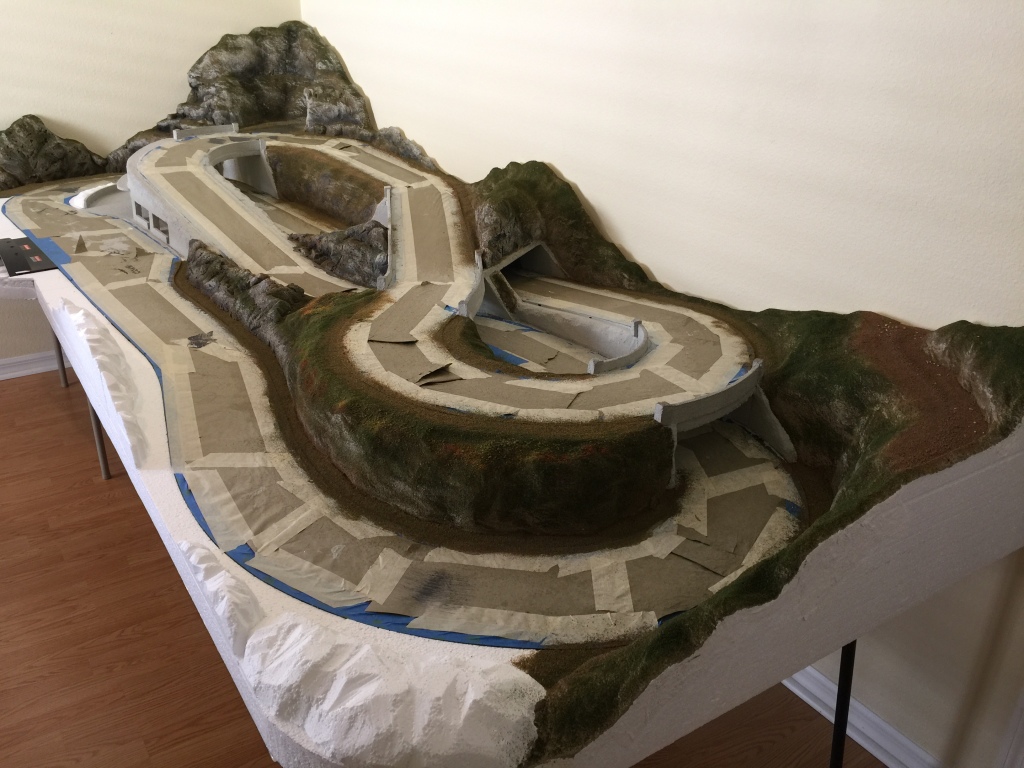 Here’s the layout as of 3/12/17. I have blue presentation boards pinned to the wall for sky, but I don’t like it at all. I also have scale pit crew workers and track officials, but I’m still in the process of painting them. I’m actually suspending the work on this project because I’m going to have to find a home for it—I need the space in the room for other things.